When you book with an account, you will be able to track your payment status, track the confirmation and you can also rate the tour after you finished the tour.
Sign Up

Or Continue As Guest

When you book with an account, you will be able to track your payment status, track the confirmation and you can also rate the tour after you finished the tour.
Sign Up
3795

Why Book With Us?

Do not hesitate to give us a call.
We are here to assist you

One of the oldest and most historic regions of the country, Port Royal has maintained much of its independence as well as its heritage. Once the enclave of pirates and other outlaws, there is still a strong seafaring tradition. Much of the old city, described in the 17th century as the “wickedest city in the west”, lies underwater beside the town, the result of an earthquake that in 1692 swallowed about two-thirds of the then-living space. Since then, another earthquake in 1907, numerous hurricanes, fires, and various population-decimating diseases have plagued the town. Despite all, the waters around Port Royal are a virtual archaeological gold mine, filled with pieces of history that tell of everyday life in the earliest days of English occupation. Port Royal is also home to the Archaeological Division of the Jamaica National Heritage Trust (JNHT), which recently completed a sonar survey of the underwater city, revealing a sunken pirate ship in the Kingston Harbour. To date thousands of artefacts have been recovered, and there are plans to develop a local museum to showcase these items once the research on them is complete.

Local Flavour:
Port Royal is a community of proud people, fiercely defensive of their privacy, yet warm and welcoming to those interested in visiting. The community is especially close-knit because of its layout – everywhere in town is within walking distance, and there are several generations of people all living together. Perhaps the town’s best attribute is its comfortable, laid-back temperament – on any given day there are children playing in the streets, young adults gathered in groups hanging out, and older folk sitting on verandas watching the world go by.

Famous For:
Pirates! In the 17th century, Port Royal was the headquarters of the numerous swashbuckling scoundrels that plundered the high seas. Of the more famous pirates to be associated with Port Royal are Sir Henry Morgan, Calico Jack and Blackbeard Teach.

“THE EARTH OPENED AND SWALLOWED many people, before my face, and the sea I saw came mounting in over the wall, upon which I concluded it impossible to escape.”

Edmund Heath, survivor and eyewitness to the devastating 1692 earthquake wrote these words in a letter from the safety of a ship moored in the city’s harbor, overlooking the ruins of his city. Port Royal, once called “the most wicked and sinful city in the world” was famous the world over for its booze—the blackout-inducing Kill Devil Rum, its pirates, and its prostitutes. Needless to say, when the city was nearly destroyed, there were some parties that saw it as a convenient solution to an ugly problem.

The English and their pirate friends were relatively new to the area. Jamaica had been held by the Spanish since Columbus first declared it “the fairest island eyes have beheld” in 1494. Lacking gold or other obvious exploitable wealth, the Spanish held it but did not focus much energy there. It came under English power in 1655, after Cromwell sent English raiders to invade and capture the Spanish stronghold at Hispaniola (now Haiti and Dominican Republic, then the center of Spanish trade in the Caribbean). Cromwell’s men failed spectacularly at taking Hispaniola and turned to Jamaica as a second choice, better-than-nothing option.

Located on the southeast coast of Jamaica, the natural harbor at Port Royal became the center of English life in Jamaica. By the late 1600s it had become one of the largest European cities in the new world, second only to Boston. It had also become infamous home of pirates, prostitutes, and Englishmen on the make. Far from home, they made their livings off of the slave trade, slave labor in plantations, and the money that the pirates brought in from their looting forays against the Spanish.

It may be seen as an indicator of the caliber of vice in Port Royal that in 1675 the notorious pirate Henry Morgan became the Lieutenant Governor. In fact, Morgan began to crack down on overt piracy as the grand era of privateering he had been part of began to to enter its waning phase. He died just four years before the earthquake struck and was buried in the Palisadoes cemetery.

On the morning of June 7, 1692, a massive earthquake estimated at a 7.5 magnitude hit the island. The city, largely built over sand, suffered instantly from liquifaction, with buildings, roads, and citizens sucked into the ground. Geysers erupted from the earth, buildings collapsed, and finally the city was hit by tsunami waves, dragging what had not been destroyed out to sea. In the end, some 33 acres of the city disappeared under water, four of the five forts were destroyed or submerged, and 2000 people were killed. The cemetery where Captain Morgan was buried slipped into the sea, its bodies floating up to mix with the freshly dead.

Even before the earth stopped shaking, locals reported that the looting began, one writing: “Immediately upon the cessation of the extremity of the earthquake, your heart would abhorr to hear of the depredations, robberies and violences that were in an instant committed upon the place by the vilest and basest of the people; no man could call any thing his own, for they that were the strongest and most wicked seized what they pleased….”

As news spread of the destruction of Port Royal, it was picked up as a cautionary tale and a sure sign of divine retribution for the lewd behavior of the pirates and prostitutes, the pretensions and wealth of the gentry of the town, or the sins of slavery, depending on the city and the audience.

But at any rate, the earthquake did not end Port Royal’s wicked ways, nor its relationship with vice or with pirates who continued to stop by for another 50 years while they preyed on Spanish ships. In fact, in 1720, John “Calico Jack” Rackham was hanged at Gallows-Point in Port Royal by order of pirate hunter—and former privateer—Woodes Rogers (best known for his rescue of the castaway Alexander Selkirk, the inspiration for Robinson Crusoe).

Since then the city has been racked by fire, earthquake, and hurricane several times. The English finally decided to close its naval station at Port Royal, effectively closing it for business, and most residents left. In 1951, what was left of Port Royal was hit by Hurricane Charlie, destroying more property and leaving only a few of the original buildings standing.

Today most of the remains of the 17th century city lie under up to 40 feet of water. Up until the 1900s visitors reported on the city still visible below the waves and the eerie sensation of floating over the rooftops. Since the 1950s, divers have been exploring and cataloging the submerged city. In 1969, Edwin Link discovered the most famous artifact: a pocket watch dated 1686, stopped at exactly 11:43.

More recently the Nautical Archaeology Program at Texas A&M University and the Jamaica National Heritage Trust conducted underwater archaeological examinations, ending in 1990. Their explorations have brought to light artifacts of 17th century life rarely seen. Because of the nature of the disaster, which left many buildings intact and more or less undisturbed, it has been compared to Pompeii for its archaeological wonders and was a designated National Heritage Site in 1999.

Special access from the government is required to dive in the restricted Port Royal ruins area, but many of the items recovered over the years can be seen at the Museums of History and Ethnography at the Institute of Jamaica in Kingston.

Know Before You Go

At Port Royal (on land):

Fort Charles & Fort Charles Maritime Museum: Originally built by the English as Fort Cromwell after seizing the land from the Spanish, the fort is in good shape largely due to extensive preservation and rebuilding efforts over the years. A plaque reading “You who tread in his footprints, remember his glory” reminds visitors that a young Horatio Nelson was stationed here.

Fifteen minutes by boat from Port Royal is a small, low-lying island cay with one of the most beautiful beaches in Jamaica. The largest of the many small cays off the coast of Port Royal, Lime Cay is uninhabitable by humans because it is occasionally submerged when the tide comes in. Lime Cay has been the source of many scams and hoaxes whereby the cay is “sold” to unsuspecting buyers as a potential location for a private resort. Don’t be fooled, Lime Cay is a part of Jamaica, and the beaches there are public and open to all who can get out there.

Local Flavour:
On Sundays, Lime Cay is the favourite beach getaway for city folk, many of whom moor their boats at the Morgan’s Harbour Marina and sail out for the afternoon with lunch and refreshments, since there are no facilities on the island. From Morgan’s Harbour, a shuttle or boat rental for the day can be arranged, but for the intrepid visitors, a small fee will convince a fisherman in the town of Port Royal to give you a ride to the island in the morning and return for you in the evening.

Famous For:
Sunday afternoon limes on Lime Cay are very popular among Kingstonians. On weekdays clothing-optional sunbathing is acceptable since there, in all likelihood, will be no one around. On Sundays, however, the tone and temperament changes completely, as the tiny island pulsates with life, laughter and good times.

Don’t Miss:
Some of the best snorkelling on the south-east coast of Jamaica can be done around Lime Cay and the other small islands nearby. 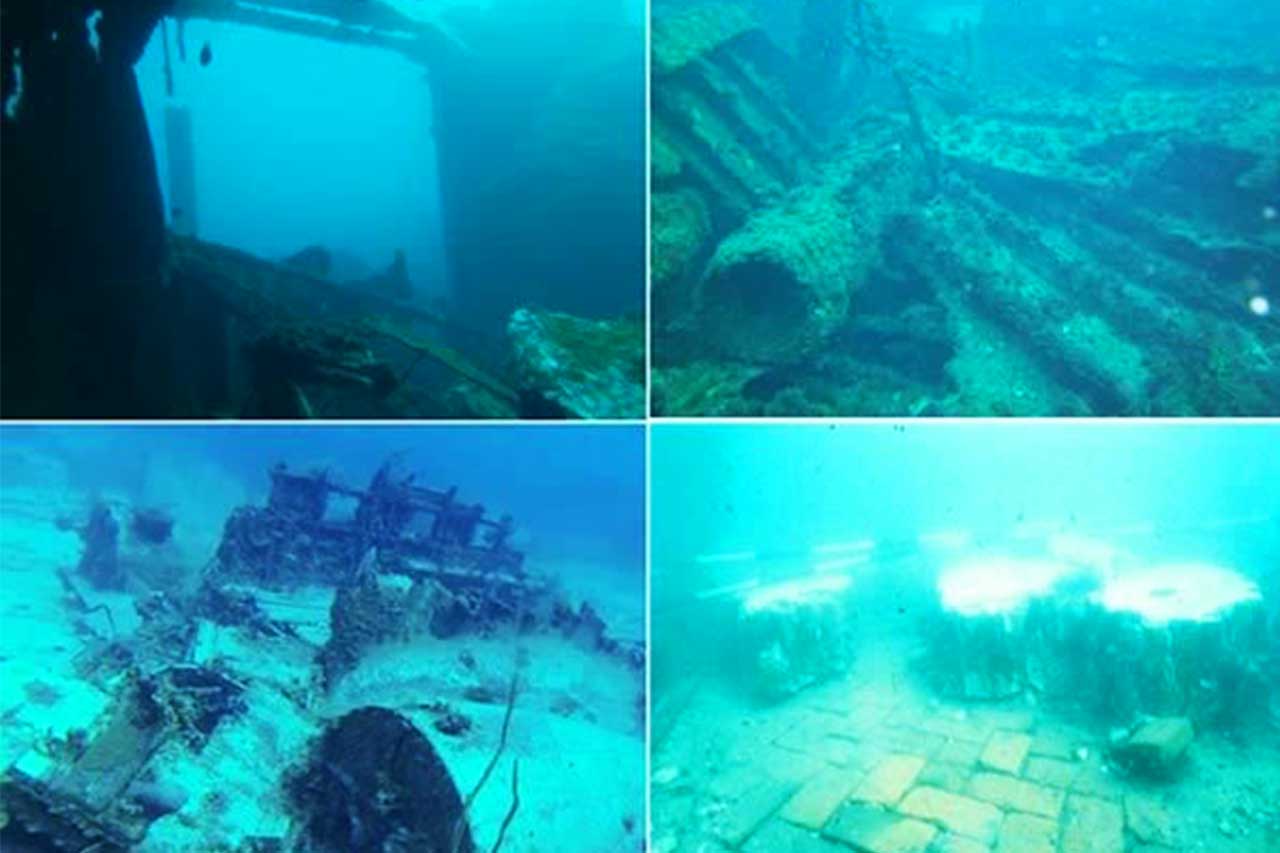 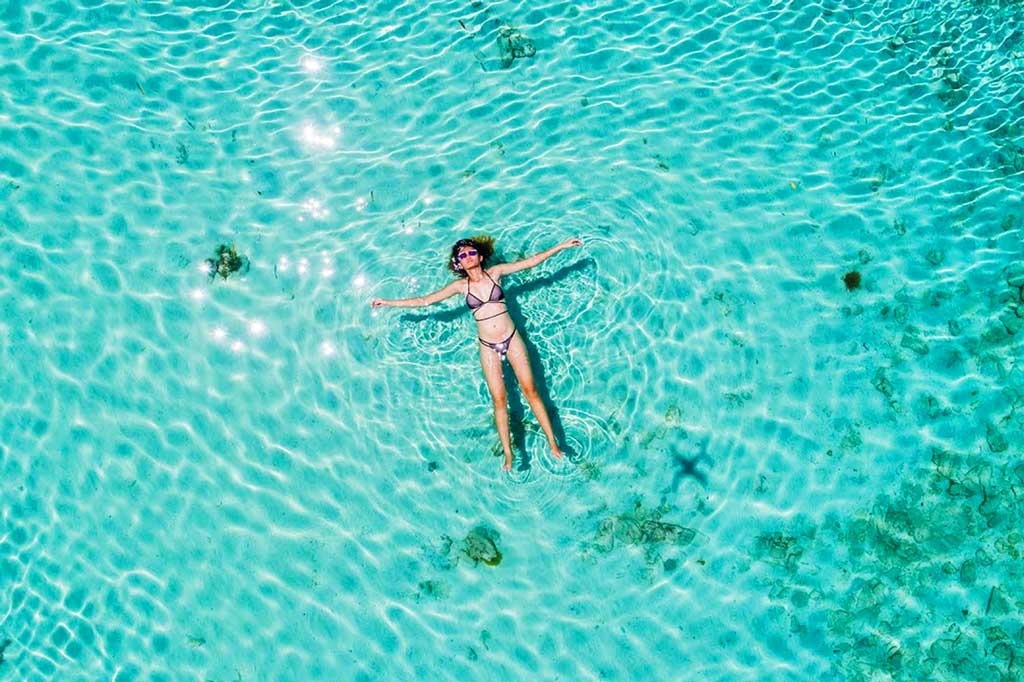 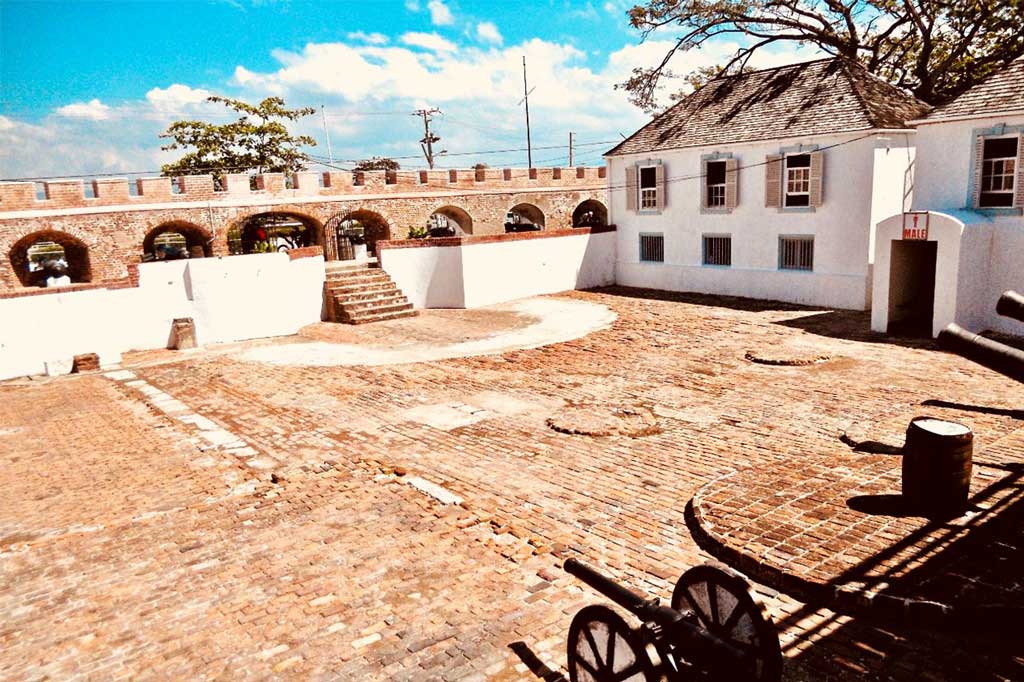 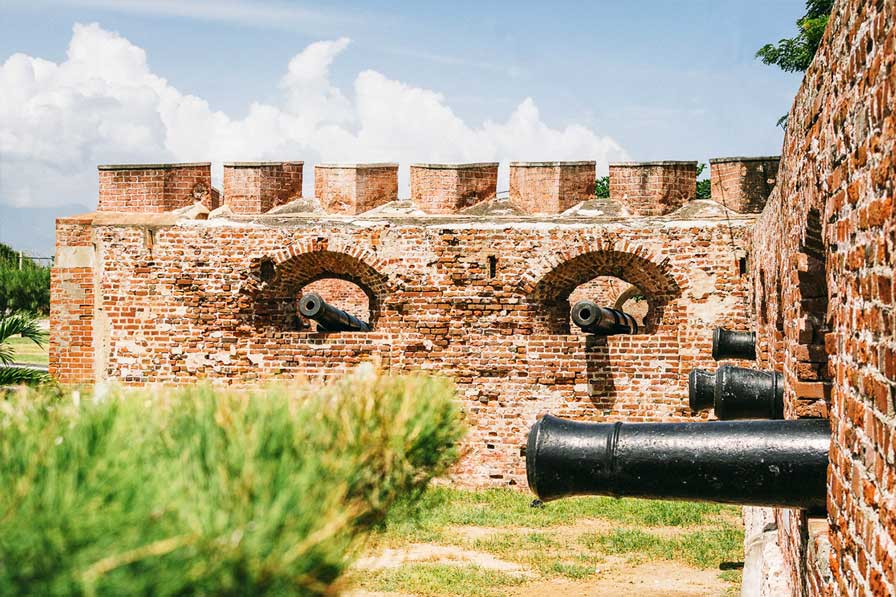 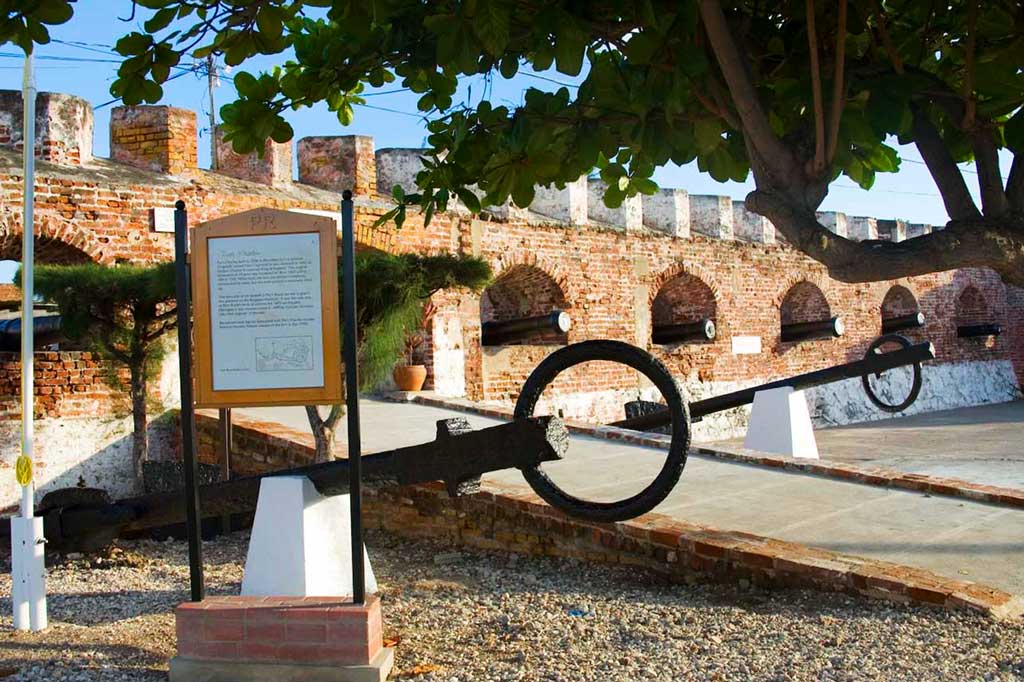 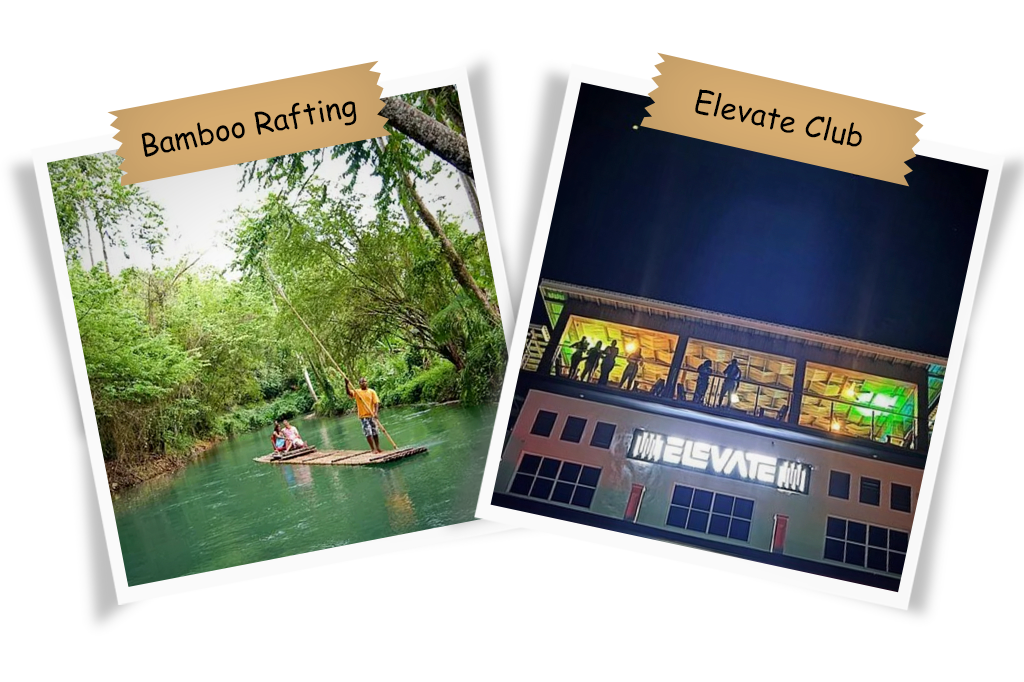 From$125
4-6 Hours
0
4 travelers are considering this right now!
Send a message
Chat with us
Hi there!
Let us help you plan your excursions.
start by clicking the button below.